PARIS — After traveling more than 4,000 kilometers in three days, a group of Inuit from Nunavut have arrived in France to demand the return of a Catholic priest who had traveled the same distance when he left Canada a year ago. 29 years.

Reverend Johannes Rivoire, 91, spent more than 30 years as a parish priest in Nunavut, primarily in Arviat and Naujaat, between 1960 and 1992. He has been accused of sexually abusing boys and girls during this time, some as early as the age of six. .

But Rivoire left Canada for France in 1993 and those charges were stayed in 2017 after prosecutors concluded there was no longer a reasonable prospect of conviction.

The group, which arrived in Paris on Monday morning organized by Nunavut Tunngavik Inc., includes Tanya and Jesse Tungilik, the children of the late Marius Tungilik, one of those whom Rivoire was accused of abusing in 1998.

It also includes Steve Mapsalak, a former Nunavut MPP whom Rivoire was also accused of abusing at the time.

These charges were never tried in court.

However, earlier in 2022, the RCMP brought another charge against Rivoire for allegedly sexually abusing a girl in Arviat and Whale Cove between 1974 and 1979.

The delegation that is in France this week wants the French government to act by extraditing the aging priest so that he can be sent back to Canada.

“We have to heal. Rivoire must face justice,” Mapsalak told a room full of French and Canadian media at a press conference shortly after he got off the plane. 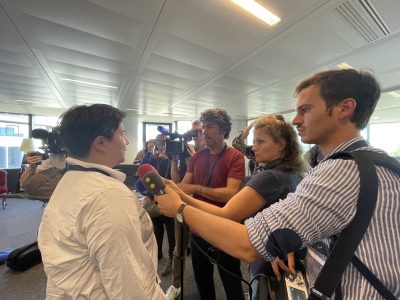 Mapsalak told reporters he didn’t want to go into detail about what happened to him, choking back tears as he spoke.

“I’m not going to go into detail about what happened. but I am very grateful to my late and good friend who started accusing him, Marius Tungilik,” Mapsalak said, pausing in between words to wipe the tears from his eyes.

“We know where he lives now,” she said.

Tungilik’s father killed himself in 2012 at the age of 55, “having never received answers or justice”, Tungilik said.

“I can’t imagine how he would have felt if he knew his charges against Rivoire were dropped in 2017. I’m glad he didn’t,” Tungilik said, his voice cracking.

The group will travel to Lyon on Wednesday, where they will meet Church officials and, they hope, Rivoire himself, although he has declined to meet them.

In February this year, police charged Rivoire again, this time on a single count of indecent assault on a girl in Arviat and Whale Cove between 1974 and 1979.

In July, Canada’s Justice Department officials asked France to extradite Rivoire so he could face justice in Canada.

At Monday’s press conference, Nunavut Tunngavik Inc. CEO Kilikvak Kabloona read a statement, addressed to the media, from the woman who came forward earlier this year, leading to the new charge against Rivoire.

“I want it in court. I want him in Nunavut for justice in my own language,” Kabloona read in the statement.

NTI President Aluki Kotierk, who also traveled with the delegation, told the room that she wanted France to follow through on Canada’s extradition request. Although Canada has an extradition treaty with France, the French penal code protects its citizens from it.

Kotierk noted the investigation by an independent commission in France in 2021 into the sexual abuse of children and young people by Roman Catholic clergy since the 1950s. Its final report found that more than 3,000 priests and clergy had abused minors for five decades in this country.

“You dismantle the systems that allowed abusers to be hidden and protected. You put the abusers behind bars,” Kotierk said,

“This is how the French deal with sexual abuse of children and young people. Similarly, Rivoire must face his charges in a Canadian court.

On Tuesday, the delegation will meet with staff from the French Ministry of Justice and the Canadian Ambassador to France.